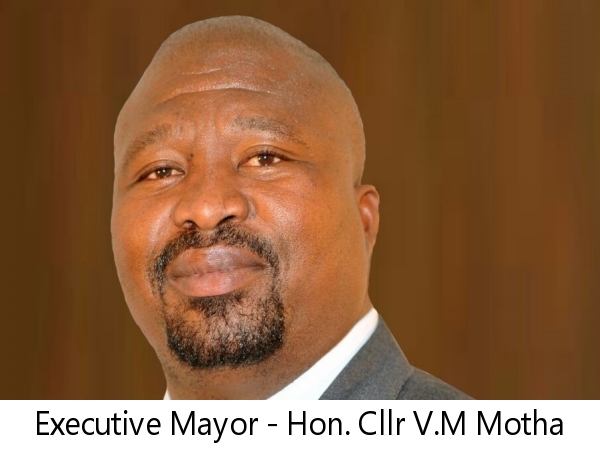 The Executive Mayor, Cllr Vusi Mduduzi Motha was born on the 27th day of July 1981. He was born at Vrede Farm near Beyers, about 15 KM outside eMkhondo town. He started schooling at Mispa Lower Primary School and Salem Primary School before proceeding to Ndawonye Higher Primary School. He did his higher education at Ndlela High School.

He started his political careers from the ranks of the ANC Youth League where he played an active role in shaping the youth involvement in community development and education. Executive Mayor Vusi Motha pursued his political path and his passion in politics saw him become elected into the Regional Executive Committee of the African National Congress of the Gert Sibande. He is currently the Regional Deputy Chairperson of the ANC.

His early days of work started from the local Forestry. He once worked as a Petrol Attendant at SASOL garage on the N2 road en route to KwaZulu Natal. He later joined the Mkhondo Local Municipality where he worked as a Fire Fighter. This opportunity opened him better doors of formal working career when he was appointed as the Disaster Officer before being promoted to the higher position of the Disaster Manager in the local-based Gert Sibande District Municipality Disaster Centre where he was coordinating the emergency services of the district. The Executive Mayor Motha was later appointed to serve as the Parliamentary Officer in the Mpumalanga Provincial Department of Human Settlements and Department of Agriculture, Rural Development, Land and Environmental Affairs, respectively.

Between the year 2014 and July 2016, he was deployed in the Gert Sibande District Municipality where he was the Member of the Mayoral Committee responsible for Community and Social Services. Just after the recent local government elections held countrywide on the 03rd of August 2016, the ANC elected him to lead the Mkhondo Local Municipality in his capacity as the new Executive Mayor.

More in this category: « Speaker Whip of Council »
back to top